How was your weekend? We had a really nice one over here. I didn’t take all that many pictures but still wanted to catch up with you guys.

When we last talked on Saturday, I was about to leave to get my nails done.

I decided to get something a little different and I really like it. 🙂

After I got home from getting my nails done, Pat and I headed over to the NJ Half Marathon expo so he could pick up his race packet.

We walked around the expo for a while after Pat got his packet. While we were headed back to the car, Pat asked if all the excitement from everyone getting ready for the race made me want to run too, to which I quickly replied, NOT.AT.ALL. haha I have never liked running and used to dread when we HAD to run in school. I am more than happy to leave all the running fun for him. 🙂

After we left the expo, we needed to make a stop at Babies”R”Us.  No, I am not pregnant, nor did I need a gift for a baby shower. We actually needed to go there to get something for Bosco. During the Spring and Summer, we spend quite a bit of time on our back deck.  Bosco also loves to be out there with us, but hardly ever wants to stay on the deck with us and would rather roam around on the grass. The problem with that is there have been numerous occasions that random cats from the neighborhood have decided that our backyard is the best place for them to take a poop. Lovely, right? Well on several of these said occasions, Bosco found their poop and decided it would be a great idea to roll around in it. Let me tell you my friends, one time of having to clean up a dog covered in cat poop is one time too many. Sadly, I had the pleasure of the experience several times. After the last time, I told myself (and Pat and Bosco!) that it would NEVER happen again. A few days ago Pat came up with a great idea – why not get a baby gate for outside so Bosco can come out with us, but can be confined to the deck.  We had to get 2 because of the length of our deck, but we tried it out yesterday and it worked great. I am sure Bosco was less than impressed with the idea though when he saw he would have to hang out with us!

Saturday evening my sister and her boyfriend came over to bring Pat a special treat for after his half marathon on Sunday – my sister made him a mocha coffee cake. 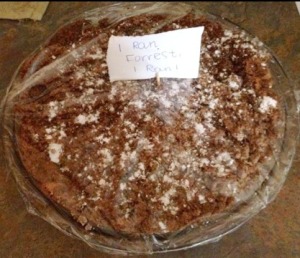 We all hung out for a while chatting and then headed out to dinner. 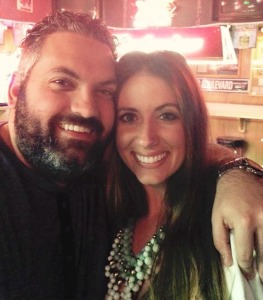 We had a nice dinner and then my sister and Nick went home after we got back to our house.  We spent the rest of Saturday night hanging out on the couch with Bosco.

With all of this race talk, I won’t keep you guys on the edge of your seats any longer (wink wink) to find out how Pat did.  He did awesome! He was done in 10 mins. less than last year.

Bosco and I were very proud of him. 🙂

He came home very sore, which even he thought was kinda strange since he runs 10 miles every weekend. The rest of Sunday was spent going to get some lunch and then lounging around the house so the athlete could recover.

Have a question or comment? I'd love to hear from you! Shoot me an email: lifeaslisaknowsit@gmail.com